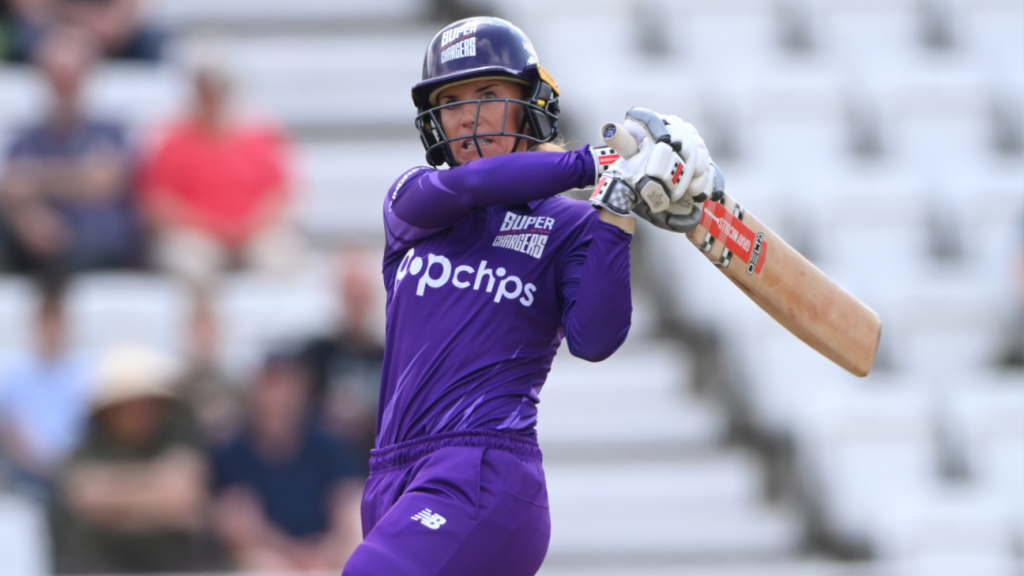 A scintillating innings from Danni Wyatt enabled Southern Brave to chase down an apparently taxing target of 141 with ease at the Ageas Bowl, as the home side joined Trent Rockets at the top of the women’s Hundred table with three wins from three. Wyatt bided her time before upping the tempo with a fusillade of fours and sixes during the second half of the innings, as Birmingham Phoenix’s attack was found severely wanting.

Wyatt’s opening partner, Smriti Mandhana, holed out in the second set of five, hitting into the wind against Erin Burns. But none of the other Phoenix bowlers managed to pick up a wicket thereafter, with the run-out of Sophia Dunkley coming when Abtaha Maqsood dropped a return chance off Wyatt on to the stumps at the non-striker’s end.

Wyatt could also have been out lbw a couple of deliveries later, but Phoenix’s captain Amy Jones opted not to review an lbw appeal off Maqsood that Hawk-Eye later showed to have been hitting off stump. Having been chugging along on 25 off 22 just beyond the halfway mark of the innings, Wyatt took 44 off the next 18, hitting the ball to all parts of the ground before finishing things in style by carting her fourth six over deep midwicket off Issy Wong.

That completed the highest successful chase of the women’s competition, and rendered an improved display from Phoenix’s top order largely academic.

Phoenix fire (apparently)
It has taken a few goes, but Phoenix look like they might have found a batting order they can settle on. Having started the tournament with Shafali Verma opening alongside Katie Mack, they pushed up Erin Burns in place of Mack in their second match and here partnered Verma with Eve Jones. The left-hand, right-hand combination brought immediate dividends with a 58-run stand – which included the third-highest Powerplay score in the women’s competition of 40 without loss.

Eve Jones was ‘Hero of the Match’ in defeat in Phoenix’s opener, having anchored the innings with 47 from 41 at No. 3, but dropped down the order for the spin-heavy encounter in Manchester. Pushed up again here, she helped counter the twin pace threat of Anya Shrubsole and Lauren Bell, who played key roles in Brave’s opening two wins. Both had trouble adjusting to bowling to the left-hander in windy conditions, with Jones taking Shrubsole’s first three legitimate balls for 10 runs.

Rachel Priest leaves London Spirit without a prayer in 18-run win at Lord’s
1dAlan Gardner
The proactive start from Eve Jones also allowed Verma to take a bit of time to settle. Much has been expected of the India opener but she has had a quiet start to the Hundred after seeing her form tail off during the multi-format series against England. She only faced two of the first 14 deliveries, then pulled Shrubsole for a boundary, before tucking into Charlotte Taylor’s offspin with a couple of trademark biffs over mid-on (perhaps aided by Brave’s field placings). An encouraging start drifted somewhat, as she fell lbw to Amanda-Jade Wellington – but 22 off 20 represented her best outing of the Hundred so far.

Jones the finisher
Amy Jones has looked Phoenix’s most-dangerous batter, but her returns had been affected by a malfunctioning top order and starts of 37 for 3 and 35 for 4 in the opening two games. Here she came out at No. 3 for the tenth set of five with her side in a strong position, and although Wellington struck again in her 10-ball stretch, Jones and Katie Mack had licence to go hard down the back nine, putting on a sparkling stand of 71 off 43.

Amy Jones moves across to slog sweep Getty Images
The pair initially saw off the middle-phase threat of Bell with a handful of nudged singles, and then combined intelligent hitting with hard running to get the scoreboard rattling. They successfully targeted the Brave spinners, four times hitting opening deliveries from Fi Morris and the two Taylors for four; and when Bell returned, Jones was confident enough to walk across her stumps to the inswinger and belt it imperiously through backward square leg. Bell went wicketless but Phoenix crucially lost altitude towards the end of the innings, only managing to score 22 off the last 20 deliveries.

Slam Dunkley
The rise of Dunkley into the top tier of English batting has been one of the stories of the summer, after an unbeaten 74 on Test debut and 73 not out to see home a successful England chase in her maiden ODI innings. Her form had tailed off a little, with single-figures scores in the T20Is and innings of 6 and 16 in Brave green – but her boundary-laden assault after the early loss of Mandhana was key in giving the home side a chance of reeling in a 140-plus target.

Dunkley’s aggressive innings featured a superbly timed flick off the pace of Wong and an impudent uppercut over third man to Emily Arlott. She might have been fortunate to survive after top-edging a spiralling catch to Jones, with Arlott’s delivery harshly judged a no-ball on height – but she was definitely unlucky to be run out backing up, when Maqsood dropped the ball on to the stumps. Her innings also allowed Wyatt to slipstream her way into form, as the game’s momentum swung towards Brave.

Wyatt goes through gears
Wyatt is one of the most-destructive batters in the women’s game but she also showed her sense of game management to help snuff out a daunting chase with an eye-popping 18 balls to spare. She scored 6 from 6 during the Powerplay and was going at just above a run a ball when joined by Stafanie Taylor, but killed Phoenix’s chances with a clinical assault. Her first six saw her step outside leg stump and hammer Wong’s pace over extra cover, and she then swept Maqsood over deep square leg, before hitting Georgia Elwiss over long-off. The third-wicket stand with Taylor was worth 74, Wyatt crunching 51 of them, as Brave’s fans got a first glimpse of what their power-packed batting order can do.