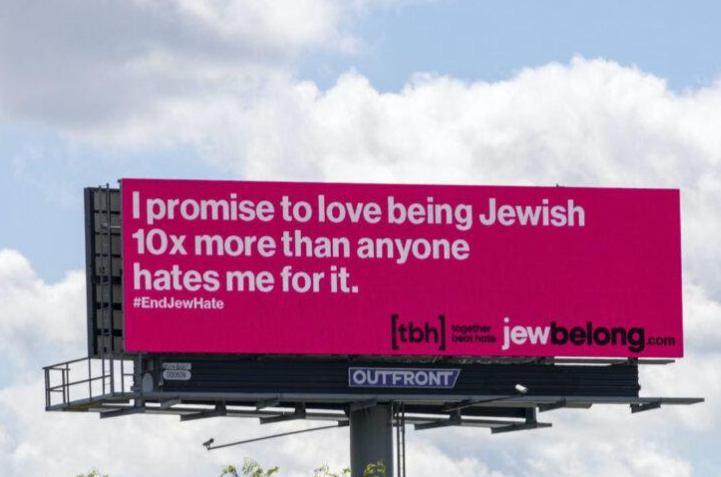 Greater Boston area highways are home to a new billboard campaign that’s raising awareness of antisemitism, or Jewish hate. While he’s not the man behind these billboards, Robert Kraft appreciates what they’re doing.

A number of bright pink billboards went up seemingly overnight along some of Boston’s busiest highways. All of these billboards are designed to be noticed, and they all communicate the same message although their wording differs.

The purpose of this pink billboard campaign is to raise awareness of antisemitism. One billboard’s message is emblematic of the direct frankness that they all have: “Does your church need security cameras? ‘Cause our synagogue does.” Another one reads: “We’re just 75 years since the gas chambers. So no, a billboard calling out Jewish hate isn’t an overreaction.”

Archie Gottesman is the creator behind this billboard campaign, and he has a simple aim. He hopes to raise awareness of antisemitism — or Jewish hate as he prefers — among both Jews and non-Jews. Sparking conversations will bring the ongoing issue to light.

Robert Kraft has shown that he appreciates the efforts of Archie Gottesman’s billboard campaign. While antisemitism isn’t the only issue that the Kraft family focuses on, addressing Jewish hate is consistent with the family’s overall goal to end all types of hatred.

Speaking for the Kraft family, Josh Kraft reflected on a recent antisemitic attack in the Boston area. He went on to express the importance of raising Jewish antisemitism awareness: “Just get the message out; make people aware that Jew hatred is too prevalent in this country and we need to do something about it.”

Although Robert Kraft didn’t personally comment on the attack that Josh Kraft referenced, Robert certainly does share similar thoughts and Josh’s statement is representative of the entire Kraft family. Josh is the President of the family’s philanthropic foundation.

Robert Kraft is an American businessman and serves as the chief executive officer (CEO) of The Kraft Group. The Kraft Group holds assets and has interests in a variety of sectors.