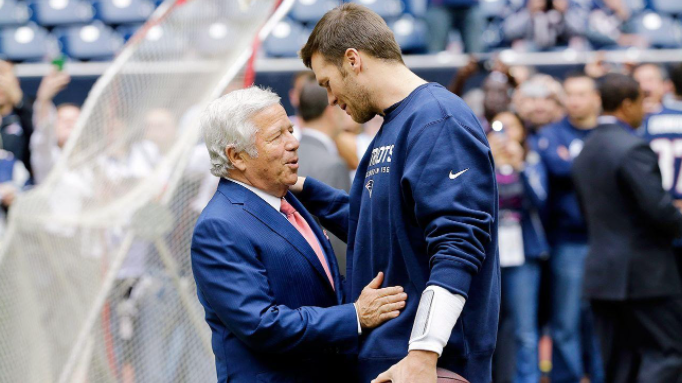 For almost two decades, Tom Brady broke records and the hearts of opposing fan bases alike as the quarterback of the New England Patriots. In 2020, though, the seemingly ageless quarterback decided to take his talents to Tampa Bay where he won a staggering seventh Superbowl ring in his first season as the Buccaneers’ starter. It was a move that has worked out quite well for Brady, with his ability to win the Superbowl during the first year with his new team solidifying his status as the greatest of all time. Now, according to Patriots owner Robert Kraft, it’s time for Bill Belichick to do the same.

In a recent appearance on the “i am athlete” podcast, former NFL superstar LeSean McCoy recounted meeting Robert Kraft at a party where the two men had an interesting conversation about Brady’s departure from New England. According to McCoy, Kraft told him, “I’m mad (Tom Brady) left. I told Bill, ‘Damnit, you let Tom win a championship. It’s time for you to win one.”

While there are plenty of reasons why Brady chose to depart New England for Tampa Bay, the opportunity to separate his legacy from that of Belichick undoubtedly played a role. Over the years, many of Brady’s detractors have called him a “system quarterback” and insisted that he would not have enjoyed the same level of success if not for the privilege of playing under Belichick. By winning a Superbowl with head coach Bruce Arians at Tampa Bay, Brady was able to put these criticisms to rest.

Now that Brady has proven that he is capable of winning without Belichick, Robert Kraft is expecting Belichick to prove that he can win without Brady. In the same way that Tom Brady’s detractors have attributed his success to his head coach, Bill Belichick’s detractors have contributed his success to the quarterback that helped him win all six of his Superbowl rings. Unlike Brady, though, Bill Belichick has not yet been able to prove these doubts wrong.

That doesn’t mean he won’t have plenty more opportunities to do so, though. Following Tom Brady’s departure, the Patriots picked up Cam Newton to start the 2020 season. After the results were less than desirable, New England drafted quarterback Mac Jones out of Alabama in the first round of the 2021 NFL draft. Mac Jones – hot off an undefeated championship season with the Crimson Tide – got off to a stellar start during his rookie campaign in 2021, leading the Patriots back to the playoffs and showing flashes of greatness that have many Patriots fans already declaring the young quarterback as “Tom Brady 2.0”.

Only time will tell if Mac Jones is able to lead the Patriots back to the promised land and help cement Belichick’s legacy as the greatest coach of all time. One person who isn’t so confident that will happen, however, is LeSean McCoy. Starting in September 2022 will be the next time we get to see if Bill Belichick is indeed able to win it all without Tom Brady and put such doubts to rest.

What You Need To Know About Zerodha Review For Traders?

How To Clain The Latest No Deposit Forex Bonus For Traders